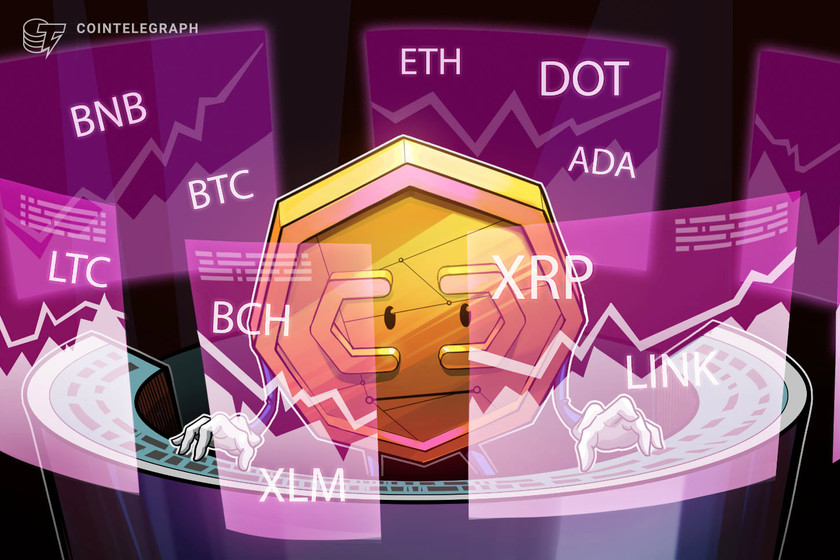 Bitcoin and altcoins both saw a strong bounce off their intraday lows, which signals that traders still view dips as buying opportunities.

Every uptrend witnesses periodic bouts of profit-booking as short-term traders tend to unwind positions either on adverse news or at critical technical resistance levels. This occurred with Bitcoin (BTC) today as the price momentarily dropped below $48,000 and traders scrambled to close or top up positions before being liquidated.

Another possible factor that may have exacerbated the fall could have been the unwinding of excessively leveraged long positions. About $1.64 billion worth of Bitcoin futures positions were liquidated during today’s sharp pullback.

However, derivatives data for Bitcoin futures do not show any negative development, as highlighted by Cointelegraph Markets analyst Marcel Pechman.

Let’s analyze the charts of the top-10 cryptocurrencies to spot the critical levels on the upside and the key support levels on the downside.

Bitcoin broke above the resistance line of the ascending channel on Feb. 19, but could not pick up momentum. This showed that the current uptrend was tiring out. Traders aggressively booked profits today, which pulled the price down to the 20-day exponential moving average ($48,081).

However, the lower levels continue to attract buyers as seen from the long tail on the daily candlestick. If the price sustains above the midpoint of the channel, the bulls will again try to push the pair above the channel.

If they manage to do that, the BTC/USD pair could resume the uptrend. The next target on the upside is $60,974.43 and then $66,000. The upsloping moving averages and the relative strength index (RSI) in the positive territory suggest that bulls are in control.

Contrary to this assumption, if the price sustains below the midpoint of the channel, the bears will again try to break the 20-day EMA support. If they manage to do that, the pair may drop to the 50-day simple moving average ($39,885).

Ether (ETH) turned down from the resistance line of the ascending channel on Feb. 20, indicating that traders booked profits after the price reached the psychologically important level at $2,000.

The selling continued today and the ETH/USD pair dropped to the support line of the ascending channel. However, the positive sign is that the bulls purchased the dip as seen from the long tail on the day’s candlestick.

If the buyers can push and sustain the price above the 20-day EMA ($1,753), the positive momentum may remain intact.

Binance Coin (BNB) has been witnessing volatile moves in the past few days. After the sharp rally on Feb. 19, traders aggressively booked profits on Feb. 20. The bulls tried to resume the uptrend on Feb. 21, but the higher levels have again attracted profit-booking.

On the contrary, if the bears sink the price below $206.1262, the decline could extend to the 20-day EMA ($168). This is an important support to keep an eye on because a break below it will suggest a trend change and a likely fall to $118.

Polkadot (DOT) broke above the ascending channel on Feb. 19 and rose to a new all-time high at $42.2848 on Feb. 20. However, the long wick on the day’s candlestick showed profit-booking at higher levels.

After forming an inside day candlestick pattern on Feb. 21, the DOT/USD pair slumped back into the channel today. However, the bulls bought the dips and have pushed the price back above the channel.

The buyers will now try to push the price above $42.2848 and resume the uptrend. On the other hand, the bears will try to sink the pair back into the channel. If they succeed, the pair may drop to the 20-day EMA ($28.89).

Cardano (ADA) surged above the $0.9817712 overhead resistance on Feb. 20 and reached $1.1980811. However, the long wick on the daily candlestick showed profit-booking at higher levels.

The selling intensified today and that pulled the ADA/USD pair down to the 20-day EMA ($0.834). However, the long tail on today’s candlestick shows aggressive buying at lower levels.

XRP continues to trade inside the $0.50 to $0.65 range. The altcoin bucked the trend today and rallied while most other major cryptocurrencies were witnessing sharp selling.

The price had rallied to $0.65155 today but the bulls could not sustain the higher levels. This shows the bears have not yet thrown in the towel.

However, the upsloping 20-day EMA ($0.50) and the RSI in the positive territory suggest the path of least resistance is to the upside. If the bulls can propel and sustain the price above $0.65, the rally may extend to $0.78608.

This positive view will invalidate if the price turns down from the current levels and breaks below the $0.50 support. If that happens, the XRP/USD pair may drop to $0.3855.

The bulls could not sustain Litecoin (LTC) above the $240 overhead resistance from Feb. 17 to Feb. 21. This failure to resume the uptrend could have attracted profit-booking from short-term traders, which resulted in a sharp fall today.

The LTC/USD pair broke below the 20-day EMA ($198) and the $185.5821 support today, but the long tail on the day’s candlestick shows the bulls purchased this dip. The flattening 20-day EMA and the RSI just above the midpoint, suggest a balance between supply and demand.

Chainlink (LINK) turned down from the resistance line of the ascending channel on Feb. 20 and formed a Doji candlestick pattern on Feb. 21. The uncertainty of the Doji candlestick was resolved to the downside today.

The LINK/USD pair plunged below the 20-day EMA ($30) and the support line of the channel today. However, the long tail on the candlestick shows aggressive buying by the bulls at lower levels.

The range-bound action in Bitcoin Cash (BCH) resolved to the downside today when the price dipped below the $670 support. This breakdown showed that the equilibrium had tilted in favor of the bears.

The BCH/USD pair broke below the 20-day EMA ($610) and fell to an intraday low at $533.33 today. However, the bulls aggressively purchased the dip below the $539 support, resulting in a sharp rebound.

If the price sustains above the 20-day EMA, the bulls will again try to push the price back into the $670 to $745.39 range. If they succeed, it will suggest that the current correction could be over.

Stellar Lumens (XLM) failed to resume its uptrend in the past few days, which showed a lack of demand at higher levels. This could have attracted profit-booking from short-term traders who may have dumped their positions today.

The XLM/USD pair broke below the 20-day EMA ($0.44) and the $0.409 support today, but the bulls purchased at lower levels. The flattish 20-day EMA and the RSI below 58 suggest the bullish momentum may be weakening.

If the bulls fail to sustain the price above the 20-day EMA, the bears will again try to sink the price below $0.409. If they manage to do that, the pair could slide to the $0.35 support.

On the other hand, if the price sustains above the 20-day EMA, the bulls will again try to resume the uptrend. A break above $0.535 will suggest an advantage to the bulls and may result in a retest of $0.600681.